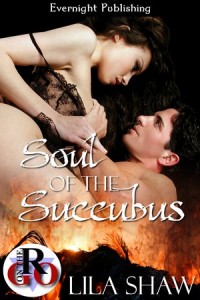 1. If your characters could pick a food to play with in the bedroom, what would they use?

My characters are rather fond of eclairs…squeeze the cream filling out into exotic locales for licking, then fill the empty eclair with something else (use your imagination). Lick off chocolate first then slowly nibble the outer pastry bits away until the new inner filling is discovered.

2. How old were you the first time you read a romance novel? Erotica?

I think I was in my mid-teens when I discovered the gothic romances of Victoria Holt, Phyllis Whitney and Mary Stewart. After that I moved on to Harlequin, all sweet romances, because they were cheap and easily found in vast quantities in my library. The “hard core” stuff (Rosemary Rogers et. al. who is really not so hard core compared to what I read now) was problematic, not because of the content but because the covers were so in your face bodice rippers and embarrassing. I’m a rather private person, so I really didn’t start to read erotica until I got my Kindle and discovered the wealth of ebooks out there.

3. What is your favorite romance genre to read? Why? (Paranormal, sci-fi, contemporary, MM, menage, etc.)

I love contemporary and historical the best, but I’ll read paranormal too, sci-fi if it’s steampunk more so than studly aliens. Those kind of weird me out. I have not yet developed a taste for menage or M/M.

I’d go with short hair, then bald, then long. Long hair seems too Zoolander or Wayne and Garth to me–take your pick of either extreme. Bald is in your face aggressive, which can be hot, but I like an alpha in beta’s clothing, which means he’s bald on the inside, but conservatively shorn on the outside. Rawrrr!!

I like to write in the morning before the rest of my family wakes up. I’m naturally an early bird. That’s when I also exercise too. I start to conk out around 9 PM. I have an office I use to do 99% of my writing, though I occasionally write on my lunch break at work or on my netbook while watching TV with the Silverback (husband).

6. Bonus question! Do your characters use birth control (i.e. condoms) and if so, how do you make the mechanics of it sexy?

Unless they are paranormal (which all my succubus ladies are), they use condoms in their first sexual encounters. I don’t bother trying to make it sexy. I go more for making it quick and unobtrusive OR I build it into the story as a sign of intimacy. I had one couple discuss getting tested after the sex scene as a way to show how much commitment they’d developed to each other. Sounds dry when dissected but it worked in the story pretty well as I’ve had readers comment on how they liked the frank discussions the characters had.
7. Tell us about your latest release or what you’re working on now.

My latest stand alone release is Succubus Games but I have a short story in the Vanilla-Free Christmas anthology from Evernight.

It’s time for Eva to ditch her pesky virginity, and when she needs help, there’s only one man on her shortlist: Charlie Greenwood, her dad’s best friend.

There was an error retrieving images from Instagram. An attempt will be remade in a few minutes.