[ETA: I have a winner (picked at random via randomizer.org)!! Thank you all so much for hopping over and commenting! Stay tuned… Evernight’s Book Boyfriend Blog Hop starts on April 25! I’ll be giving away an Amazon gift card!] 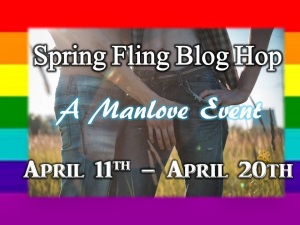 Come one, come all… let’s celebrate spring! I don’t know about you, but I’ve been dying for some warm weather and steamy sunlight. In celebration of the color that is finally popping up all over the place, I’m giving away one digital copy of ALL my manlove books to ONE LUCKY WINNER! That’s four books for free (and it’s open to international participants)! What do you have to do to win?

Read the blurbs below and match the covers with the blurbs. Post your guesses in the comments section, follow me on Twitter (@erinmleaf) and FaceBook. I’ll pick the winner out of my virtual hat!

In addition, the delightful Ms. Hennessee Andrews is giving away a $50 Amazon Gift Card for the grand prize! The Rafflecopter link for that prize is below. So hop on over to the next blog for more chances to win big! It doesn’t get any better than that! I’ve posted the list of blogs below—-> scroll down to hop away!

Blurb #1: Professor Seth Dustin thinks he’s alone in the world, but when he meets another shifter, he’s forced to reevaluate his whole life. Dex Connor is gorgeous, talented, and male—everything Seth had no idea he wanted.

However, when Seth discovers Dex is keeping dangerous secrets from him, he must decide if he can forgive the man who has become his closest friend, the man who stole his heart. Seth never expected to find himself in the midst of a territorial fight with a rival clan. He doesn’t know how to deal with the jealous hostility of a woman who wants Dex for herself. Love is unexpectedly complicated, but is being alone better?

Rocker, shifter, mate: Dex is all of these, and more. Professor, shifter, loner: Seth wants more. When two shifters meet, instinct takes over.

Shane and Leo have been best friends forever: through high school, dating disasters, and family losses. Lately though, Shane has been feeling more and more unsettled. His girlfriend dumped him because he wouldn’t spank her, and he can’t stop thinking about the kiss he and Leo shared in high school, long before life happened and they grew up.

When Leo confronts Shane about his depression, the whole, unpleasant story about the breakup comes spilling out. Leo offers to spank Shane so he can understand the appeal, and shockingly, Shane wants to agree, but both of them are straight and he’s not sure it’s a good idea. Besides, he’s not into pain and he feels weird asking his best friend for sexual advice—Leo is too important to him to risk their friendship over something like this. So what if he can’t figure out why the idea is so intriguing?

Raphael had no idea what he was getting into when he went to Castle Archangel to study the People’s oral history. He didn’t expect his wings to suddenly change from brown to the purest white—the mark of an Omega, the destined mate of the Alpha. There has never been a male Omega before, not in all the millennia angels have flown the skies of Earth. However, when Raphael meets ebony-winged Gabriel, the true leader of the People, he knows he wants this man more than anything. Change is not always bad.

When Gabriel’s wings suddenly turn to startling ebony, he must deal with the knowledge that he is an Alpha, a leader of the angels. When he discovers that his destined mate is a man, he must accept that being Alpha of the People means accepting more than he’d expected. When their current leader challenges him, accusing Gabriel of committing one of the People’s most dishonorable crimes, Gabriel must fight: for his honor, for his mate, and for the survival of the angels.

**********
Henessee Andrews –> a Rafflecopter giveaway of a $50 Amazon Gift Card for the grand prize! Click on the link to enter

This is a Blog Hop! Click for more chances to win!