For a limited time, DAMAGED is only $0.99 at Evernight Publishing! 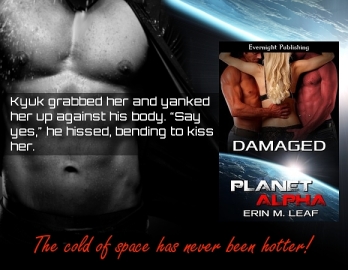 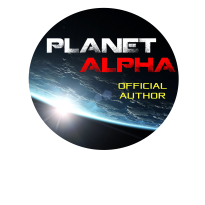 Cori knows her Xyran captivity has damaged her ability to trust, but when she meets Reiyn, desire flares despite her fear. He’s clearly hiding something, but when a distress call sends them into space together, passion takes over.

Cori enflames Reiyn like no other female ever has. She threatens his control over his hidden Xyran heritage, but he can’t fight his instincts. When his true nature is exposed during the daring rescue of a dying Xyran captain, will Cori forgive him, or will he continue his life’s work alone?

Captain Kyuk welcomes death when his ship is destroyed. He doesn’t expect to survive, but when Cori and Reiyn find him, instinct pushes him to live. He’s spent years smuggling slaves to freedom—can he now give up his own liberty to bond with Cori and Reiyn? Or is he too damaged to build that kind of emotional connection?

What are people saying about Damaged – Planet Alpha?

“Hang on to your seats, post-apocalyptic times with war, alien domination, and burned-out planet surfaces provide the background for this space opera. The tension, including confrontations with species having little to no love of humans, moves at a good pace, but the real winning feature is the connection and follow-up by a rough and tumble gal with two intense and sexy guys. Sounds like a winning formula to me. Excitingly carnal!”

“The characters are more than likable and a few emotions were touched on, Passion being hot and consuming.. Awesome … Enjoy”

“Our heroes are strong, protective men who are not only fierce in battle, but also in their love for Cori.  They’re lovers, and they want her to be “blood mates” alongside them.  Boy, does that make my heart pound a little faster!  Cori, Reiyn, and Kyuk have wonderful chemistry.”

“This book sparked feelings of joy and delight in the relationship growing on these pages. I just wanted it for myself. That makes this an outstanding book.”