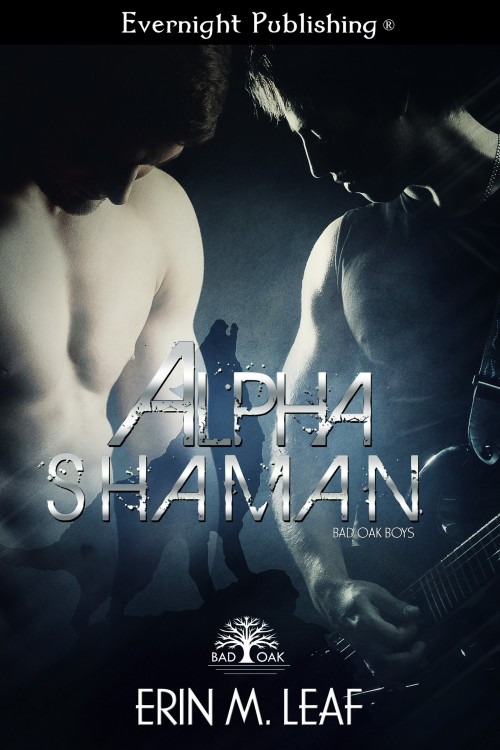 The world isn’t ready for a rock star werewolf, but Josh Oakley can’t stop biology. When his brother sends sexy wolf shaman Gerwulf to help him, instinct is too mild a word for how he feels. Gerwulf calls to his animal in a way that defies logic.

Gerwulf knows Josh is his mate the moment they meet, but he doesn’t like guys and he doesn’t intend to bond with anyone. He’ll help the musician control his wolf, but getting too close isn’t his intention. Besides, he wouldn’t know what to do with a man in his bed.

Of course, shifters can’t dodge fate—a crisis forces Josh and Gerwulf to accept their connection just in time to save Forst Pack from an old enemy. When biology ties them together beyond even a mating bond, will they be able to move past their fear and into a future that holds more than they ever expected?

Josh needed to taste Gerwulf, right the fuck now. He’d gone from confusion over his intense attraction to this wolf and straight into need. It felt right to desire this man. It felt like that unattainable connection he’d been searching for, all through the years of writing love songs and fucking random men and women on the road. “I’m going to kiss you, Gerwulf. You don’t get to say no.” His wolf growled, wanting him to get on with it. Mate.

Gerwulf stared at him, eyes dark as old whiskey. “You shouldn’t be doing this, especially not now. Your instinct to shift is confusing your libido.” He reached out and grabbed Josh’s arms, pressing his fingers into his skin as if he was afraid Josh was going to take off.

Confusing me? As if. I’m not the one hanging on for dear life. This guy is mine, even if he doesn’t realize it yet. Josh let himself enjoy the pain of the Shaman’s grip. He hadn’t expected to feel attraction like this, ever. Hell, he hadn’t expected to shift into a wolf either, but the moment Gerwulf showed up at his door, his desire for both things had grown stronger and stronger. “Your hands tell me a different story, Gerwulf.” He moved in and pressed his aching cock right into the Shaman’s hip. The man was built solid. Josh ground against him, desperate to feel a response.

“We shouldn’t be doing this,” Gerwulf said, voice cracking on the last word. His fingers flexed on Josh’s biceps. A minute tremble told Josh the Shaman wasn’t as unaffected as he tried to appear. Instead of pushing him away, Gerwulf pulled him closer.

Josh smiled, all teeth. “I’m going to shift, I promise you, but you need to let me in first.” He inhaled, savoring the warm spice scent that drifted from Gerwulf’s skin. “You smell fucking fantastic.” He leaned in and put his lips on Gerwulf’s neck. God, he wanted to bite him. Was this what it had been like for his brother? Maybe being a wolf wouldn’t be so bad.

Gerwulf trembled and dug his fingers into Josh’s arms. “I’m a Shaman. I’ll be Forst Pack’s Alpha-Shaman someday. Your wolf recognizes my power. That’s all this is.”

My cock recognizes your extreme sexiness. Josh laughed, going along with Gerwulf’s delusion that he was doing this because of some paranormal status woo-woo. “Yeah, whatever.”

Josh forced himself to lean back. He wanted to take a bite out of this man, God help him, but he didn’t want to hurt him. “You’ve never been with a guy before, have you?”

“What?” Gerwulf’s eyes widened, and he shook his head. “How did you know that?” He moved his hands to Josh’s wrists, trapping his arms against his flanks, as if that would hold him off. “Not that it matters. That’s not what this is about.”

“Don’t worry. It’s not as scary as you think.” Josh leaned in again, nosing along Gerwulf’s jaw. He took his time. This particular moment would never happen again. “We have the same plumbing. The same needs.” He wanted their first kiss to be explosive. He shoved down the niggling worry in his mind that told him he’d forgotten something extremely important. His wolf was happy. His dick was happy. Gerwulf wasn’t pulling away. What could be wrong? He’d deal with the shifting problem later. “It doesn’t have to mean anything, Gerwulf. It’s not like we’re getting married.”

“You have no idea what kind of fire you’re playing with,” Gerwulf said, hips jerking slightly. His erection, still trapped in his pants, slid across Josh’s nude cock, making them both moan.

“You’re playing with the same flame, Shaman,” Josh said, once he’d gotten control of his voice back. His dick had never before been so hard just from light foreplay.

Gerwulf flushed. “Nothing about this is normal.”

Josh groaned. “You’re sexy and hot. This is perfectly normal. You may not have fucked a man before, but I have. I’m bi and totally fine with it.” He paused. “Don’t worry. I won’t hurt you. I don’t want to scare you off.”

“For Christ’s sake.” Gerwulf let out an explosive breath. “This has everything to do with you being a wolf, Josh. Listen to me.” He shook Josh slightly. “I’m an Alpha-Shaman. You’re a Beta. Our wolves are confusing power and status with sex.”

Josh blinked, trying to force his arousal-soaked brain to function. “You think I want you because you’re a Shaman?” He chuckled. “No.”

His mouth says one thing, but his body says another. Josh wrestled with himself. He would not force Gerwulf to do anything he truly didn’t want to do, despite what he’d said. But I want one good kiss before I step away.

“Fuck this.” He leaned in and kissed Gerwulf. Immediately, the Shaman opened his mouth, letting Josh’s tongue inside. “Christ, you taste like the forest,” Josh said, shuddering. He suckled Gerwulf’s bottom lip, then dove in again. “I can’t get enough of you.” His mind felt white-hot and crazy, with his wolf howling and growling. His cock was so stiff it hurt. He wanted to take Gerwulf up against the wall. He wanted to bite him and mark him and not look back.