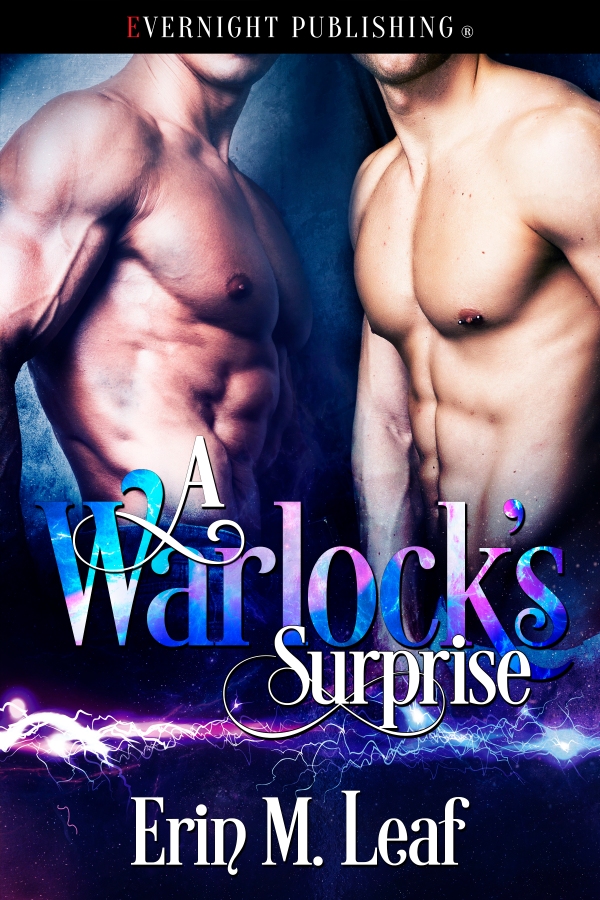 What happens when a friends-to-lovers romance leads to magic?

Leo thinks asking his soul-splice mate to marry him will be easy, but Dakota says no, again and again. When he finally capitulates, Leo believes happy ever after is in the cards, but Dakota isn’t feeling well, and meddling family members hijack their plans. Neither warlock wants the drama of a large ceremony, but the Conclave gets its way. Witches always do, after all.

When the eventful day arrives, neither man expects their old enemy to raise a demon from Hell to ruin their wedding. Witches can’t stand up to a demon, so the newly wed warlocks must save the day, but not before a surprise revelation leaves Dakota reeling.

Can Leo and Dakota survive a demon, witches, and a grandma intent on embarrassing them both as much as possible? Sadly, even magic can’t guarantee a happy ending…

Leo opened the box, took the ring out, and grabbed Dakota’s left wrist. “Put the damn thing on and shut up about it.” He pushed the metal onto Dakota’s ring finger with one swift motion.

Dakota snatched his hand away like a man burned, but it was too late. “Well, shit.” He stared down at his hand. The ring looked good. He liked it. “Fuck you, Leo,” he swore, closing his fingers into a fist. His heart gave a happy thump, but he was careful not to show that on his face.

Leo laughed. “I don’t see you taking it off.”

Dakota hunched his shoulders. “It’s too late now.” He didn’t really want to take it off. He wanted to marry Leo. You are an idiot, he told himself, thinking of his mother and his aunts, and his grandmother. His balls tried to crawl up into his body when he considered just how crazy the Conclave was going to be over this. “You know, there hasn’t been a warlock marriage in five centuries.” He ran his thumb along the ring. His skin tingled. His power liked the outward manifestation of their soul-splice, dammit it all to hell.

“You worry about the Conclave far too much, Dakota.” Leo grabbed him by the elbow and pulled him down the rocky trail. “They’re our family, you know. They’re not going to do anything drastic to us.” He laughed. “They helped us deal with your crazy boss. And they were happy that we got together. You need to let go of this irrational fear of your female relatives.”

Dakota scoffed. “Just you wait, Leo. Tuxes. And flowers. And probably a giant reception with witches from all over the world attending…” He trailed off as visions of seating arrangements rushed through his brain. “My God, it’s going to be a train wreck.” Even the warm weight of the ring on his finger couldn’t comfort him in the face of such a horror.

“Enough.” Leo dragged him up to a tree and pushed him against it. “I’m not really into public exhibition, but I can tell nothing else is going to shut you up,” he muttered.

“What are you—” Dakota broke off as Leo went to his knees, fingers already unfastening his jeans. “Leo, stop that. I’m not in the mood.” Dakota pushed his lover’s hands away, but Leo growled. Dakota’s dick twitched. I’m so fucked, he thought, shivering as Leo nuzzled into the open fly of his pants. Warm breath washed over his balls. “Fuck.” He banged his head on the tree as his cock went from soft and uninterested to hard-as-hell in less than a second.

“No time for that right now,” Leo said, mouthing along Dakota’s dick. “This is going to be quick and dirty.” He looked up, green eyes glimmering with energy. Sparks flared along his skin.

Dakota shoved the heel of his hand into his mouth and bit down, hoping the pain would help him keep his cool. It didn’t work. The moment Leo sucked the tip of his erection into his hot mouth, Dakota moaned. “Oh my God.” He glanced around the forest. He’d thought someone witnessing Leo’s proposal was bad, but this? This was worse. A lot worse.

Not that I’m going to stop him.

“Shh.” Leo licked along the underside, nibbling down the thick vein. “You taste good,” he murmured, kissing at the root.

Dakota shivered. “Anyone might come down the trail. Dammit, Leo.” He tried to make himself draw Leo to his feet, but he couldn’t. He wanted Leo to blow him in the middle of a very public walking trail. He licked his lips. “Suck me. Do it fast.”