Scroll down for a peek into the weeks right after DAWN (Stronghold 3), before Bruno Day meets his match in DAY (Stronghold 4). 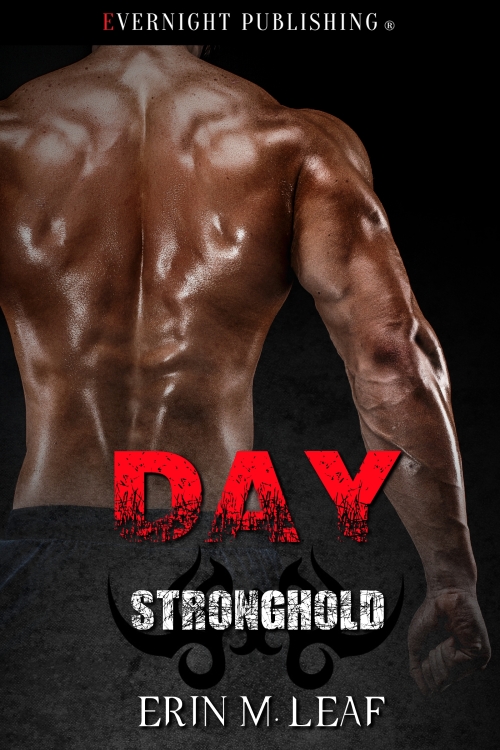 Bruno Day knows the moment he sets eyes on Amy that he won’t be able to stay away from her, but he doesn’t want to drag her into his dangerous life—his duty is to save humanity. She may help them survive if he makes her his mate, but what if the price is her death?

Amy Roderick never expects Bruno Day to show up at her house and ask for her help. She’s just an ordinary person, and he’s the larger-than-life leader of the Sentries. What could she possibly do to help? And why are her instincts telling her they’re meant for each other?

Power and determination have kept them safe for years, but now Bruno and his brothers must face the ultimate battle: an alien swarm that could devour the entire planet. Everything depends on the decision of one young woman: will Amy follow her heart or sacrifice her life for duty?

Bruno stopped just inside the coffeehouse. “This is a bad idea.” The midmorning crowd filled the small space, and he winced as their emotions battered against his mental walls. Sometimes, being an empath was more of a liability than a gift.

“Doesn’t matter. I’m in desperate need of caffeine.” Isaac pushed past him into the crowd and got in line. Solomon followed.

“He didn’t even try to disguise his appearance,” Bruno muttered.

“You know how Isaac gets without his coffee in the morning.” Greyson scowled as he hung back at Bruno’s side.

Bruno jammed his baseball cap further down on his head. He usually wore a suit and tie in public, but today his worn jeans and leather jacket might keep him from being recognized. He saw people staring at Solomon and Isaac, but so far, he and Greyson seemed to be escaping attention. “We could have made our own coffee. We didn’t have to come here.”

“When Eva gets an idea in her head, it’s best to listen. They wanted to put together a picnic, and they took over the kitchen.” Greyson shrugged. “It is what it is.”

“Isaac could have convinced Saige to let us—” Bruno broke off as Greyson laughed. His gruff younger brother rarely displayed that much emotion.

“You think any of us can argue with our paired mates? You are delusional.” Greyson’s eyes twinkled. “You’ll see.”

“I don’t think so.” Bruno frowned. He knew who his paired mate was, and he had no intention of dragging her into his life. “No woman deserves to wake up every day knowing that the entire world is watching her,” he told his brother. “Ah. Our brothers have been discovered.” He lifted an eyebrow at Greyson, watching Isaac and Solomon slowly back away from the counter as a cluster of young people accosted them. “We are next, you realize.”

Greyson winced. “You should have worn a ski mask over your face, not that stupid cap.” He stepped behind Bruno as if to hide.

“Coward.” Bruno removed his hat as the girls rushed towards them. He ran his hands through his hair and straightened his shoulders. It wouldn’t do to appear anything less than supremely in control of himself.

“I’m going to slip out the back,” Greyson said.

“Don’t you dare,” Bruno replied, grabbing his arm. His brothers thought they could wander around in public with impunity, but he knew better. A practiced smile slid over his face. “Smile, Greyson. It is time to earn your pay.”

“You don’t pay me,” Greyson said, but he stepped forward to help.

“This is also part of our job,” Bruno told him.

“When you meet your woman, I’m going to tell her you are a cruel man,” Greyson said.

“You seem very sure that I am going to meet someone,” Bruno signed the notebook one of the girls thrust at him, then posed for a selfie.

“It happened to me, and you know how long I fought it,” Greyson replied. “Fate is a stubborn mistress.”

Bruno glanced at his brother. Greyson tried to stare him down, but Bruno had centuries of practice at looking inscrutable. The only way he would ever claim the woman he knew was destined to be his was if the fate of the entire world was at stake. “Fate can be fooled,” he finally said.

Greyson frowned, but he looked away. Bruno signed another notebook. He smiled for another selfie. He very carefully did not think about the woman he’d spent his entire life ensuring he would never have to meet.