Thank you so much for nominating me. I’m so grateful and honored. 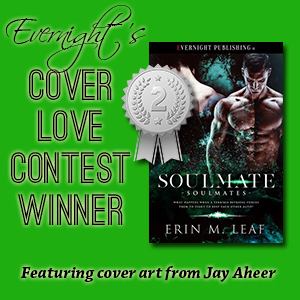 Guy Keaton doesn’t want a hookup or a soulmate or anything in between. When he lost his wife to cancer, he knew he’d be alone for the rest of his life. He has a grown son, and his woodshop, and in a world where those born with powerful gifts are few and far between, that’s all that really matters.

Theo Fraser’s empathic gift is rare and strong. He isn’t looking for love, but when he meets Guy, everything changes, because he knows that when you find your soulmate, you hold on tight and don’t let go. The only problem is that Guy thinks he’s straight, and Theo doesn’t know if he can convince a man already set in his ways to change his mind.

Will Guy be able to give up his grief and accept Theo’s love? And what happens when a terrible betrayal forces them to fight to keep each other alive?

Avery is resigned to solitude. She can’t shift, she’s overweight, and her ex cheated on her, but when Alpha Fletcher and his best friend, Mitch, return to Boulder Pack after years of traveling, she’s shocked at how much she wants them.

Fletcher doesn’t expect to meet his mate within moments of coming home, but he and Mitch are nothing if not adaptable. Avery makes their beasts howl with need, but can she accept two wolves instead of one? Triad mates haven’t been allowed in ages.

Mitch is happy to bond with Avery and Fletcher—he has room in his heart for two mates. What he isn’t happy with is Avery’s father threatening her, and making her doubt her worth. Avery is a Queen, but she has no idea what that means. Will instinct be enough to push them together, or will Mitch and Fletcher need more drastic measures to convince Avery that she’s their destiny?