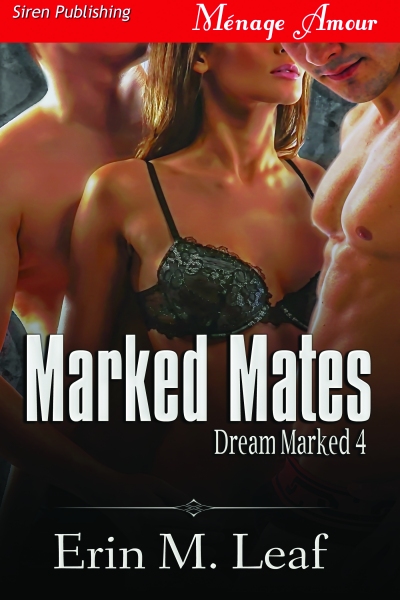 When Sparrow Martin dreams about President Morgan Wilde, she thinks she’s going crazy. Ordinary people like her don’t bond with the President, right? But when she dreams about a second man along with Morgan, she knows she needs to find her bond-mates or risk losing her mind.

Morgan knows he’s bonding, but he has no idea what to do about it. One of the people he’s dreaming about is a man whose face he can’t even see. As President, his responsibility is to his country, not his own desires. Of course, when Sparrow shows up during a White House tour, he discovers dreams can’t be denied.

Justin Boyd is working on a secret project and he doesn’t have time to figure out what’s wrong with him. He’s been sleeping badly for months, but he doesn’t have any of the signs of bonding: no wrist tattoos, no headaches. So why do two people haunt his dreams, night after night?

What are people saying about Marked Mates?

“I loved that Ms. Leaf gave us three distinct individuals. They were strong on their own and together became something much more.”

“I loved the immediate passion between Morgan and Sparrow, and it was interesting how neither felt right, even together, without their unknown third. It was fun that Morgan and Justin’s paths are so intertwined yet they had never met. When Justin senses Morgan and Sparrow bonding while he’s, er, tied up…I laughed out loud!”

“MARKED MATES by Erin M. Leaf is an interesting, and fascinating read. You are drawn right into the story and are hooked.”

“What can be more original than a bonded triad that involves the President of the United States?  Throw in creepy political intrigue, technology that is futuristic, but still understandable, and some amazing sex, and you have a WINNER!!!”

Morgan ripped open his shirt, buttons flying. Sparrow reached out, then forced her hand back down. If she touched him now it would be all over, and she wanted Justin, too. She didn’t want to make love without him again. Now that they’d figured out why their bonding was so screwed up, she didn’t want to take any chances.

“Hurry,” she said, instead of touching him.

Morgan fumbled with his pants. His erection sprang out and Sparrow trembled. His cock was thick and dusky and perfect. She hadn’t had time before to really look at him before. They’d screwed on the table, still mostly clothed, because the bonding heat demanded it from them. She wanted more. His well-muscled chest looked like something out of a magazine. His hair was mussed, but she didn’t care.

He shoved his pants down. When he straightened up, she stepped back. She could hear the water in the shower shut off. Morgan’s blue eyes gleamed and then Justin stepped out of the bathroom, naked and wet.

Morgan swallowed hard. Sparrow looked at their bond-mate, admiring the toned perfection of his body. Her eyes landed on his erection. He was just as aroused as Morgan. His cock arched up against his abdomen, wet at the tip. When he reached down and palmed himself, she groaned.

Justin grinned. “I was always bi, I just kept it to myself.”

Morgan sighed. “Same here. It doesn’t matter anymore. If I don’t touch you in the next ten seconds, I think I’m going to lose my damn mind.”

Sparrow agreed. “Yeah, what he said.”

“I’m not going to last,” Justin said in a strained tone of voice.

“Get on the bed,” Morgan said.

Sparrow didn’t know if he was talking to her or Justin, but she obeyed anyway. She backed toward the bed until her knees bumped the mattress. Justin came closer, hand still on his erection.

Sparrow’s entire body went white-hot. There was something so ridiculously sexy listening to Morgan giving orders. The president just told me to suck a man’s cock, she thought, burning up. She glanced up at him to find him also holding his erection. The shaft pushed out from between his fingers and she realized he was squeezing to hold off his climax. God, he’s hot. She sunk fingers into her pussy, unable to stop herself. She touched her clit, arching her back as sparks of pleasure shot through her.

Their bond-mate nodded and moved between her legs. She licked her lips and leaned in. Justin aimed his prick at her mouth and she opened up.

We’ve never even kissed, she thought vaguely. It didn’t matter. He fed his erection into her mouth and she moaned as the warmth of him penetrated. He tasted good, sweet and musky, and he smelled like vanilla.

Justin gasped as she used her tongue on him, then he eased out. Morgan took his place, carefully laying the tip of his cock on her lips. She licked him and he shuddered.

“So fucking hot,” Justin said, moving close again. His cock bumped Morgan’s and both men groaned. Justin waited until Morgan slid out of her mouth, and then he slid in. She sucked him, enjoying his pleasure. The bond was flaring inside the three of them, so that each one felt the others’ pleasure. When Sparrow licked her men, she felt it in her cunt, hot and decadent.

I’m going to explode. She reached up to hold both men in her hands. She began alternating between the two cocks, holding them close so that all she had to do was move her head a little. She sucked and licked until Justin started trembling so hard she was afraid she would catch him on her teeth if he had to stay upright much longer.

“Fuck me,” Sparrow said, urging him onto the bed.

The men looked at her, then at each other. The next thing she knew, Morgan was rummaging in the nightstand and Justin was pushing her up the bed. He rolled onto his back and hauled her on top.

She laughed into his mouth as his words penetrated her lust-hazed mind. “I don’t think slow is really an option.” Behind them, she heard the rip of plastic. A condom? But I told him about my implant, she thought, remembering their earlier bout of sex on the table, but then Justin ran his hands down her back and she forgot her confusion.

“Too bad,” he murmured against her lips, hands still stroking her spine. “I like it slow.”

“I’m in the mood for fast,” she said, smiling. She sank her hands into his messy hair, leaning her weight on her elbows.

He kissed her—probably to shut me up—and then she gasped as Morgan slid in behind them. His cock slotted up between her ass cheeks, hot and wet.

“God,” she said, gasping and arching away from Justin’s mouth. Justin grabbed her head and forced her back down, kissing along her jaw while Morgan rubbed his dick against her asshole.

Oh. That’s what they meant about taking it slow. And why he needed a condom. She felt stupid and blurry, just now understanding that they meant to fuck her at the same time.