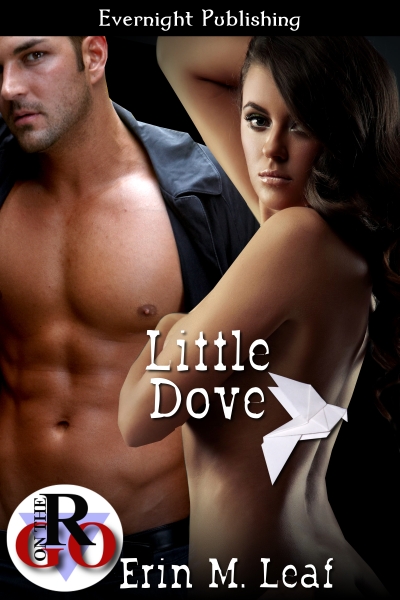 Lila’s friend claims that submitting to a Dom in bed is a wonderful stress-reliever, but Lila is skeptical. So when she opens the door and finds her old crush Theo waiting on the other side, she doesn’t know what to do. Since he fails to recognize her, she lets him in, accepting his offer to help her relax.

After he explains that Abby sent him, Lila reconsiders her misgivings about dominant men. When Theo ties her up and woos her with origami doves, she reconsiders her fear of letting go. When he makes love to her, she learns to fly.

What are people saying about Little Dove?

“What a delightful find! I absolutely recommend this one, no hesitation.”

“The characters were so well done, thought out and perfect that I could have known them for all my life.”

“Hot fast read! . . . A perfect warm up with a glass of wine for a Saturday night! Enjoy!”

“Little Dove is a HOT little piece! … The sex was hot and steamy. The chemistry between Lila and Theo almost made the air sizzle between them.”

“LITTLE DOVE is a short, fun, sexy, quick read and I really enjoyed it. I truly recommend this read.”

“Lila’s best friend Abby sends a “stress reliever” to Lila’s front door! Little do Abby or the said stress reliever (Theo) know, but Lila has crushed on Theo for years. As the two connect, literally physically connect, they bond emotionally.”

“Hmm, looks like I’ll have to tie that one up, too,” he said, standing up.

She stared at him, disbelieving. “Theo, please, don’t—”

He frowned. “You’re not supposed to call me that.”

She bit her lip. Shit. How could she have forgotten so easily?

“I’m going to have to teach you what I want from you, little dove,” he said. He grabbed her red scarf—acrylic, super-soft—her treacherous brain supplied, and wrapped it around her right leg, anchoring the bottom to the ties on her right hand.

She wiggled, but she was completely immobile, except for her left arm. God, why was this making her so damn hot? She didn’t think she’d ever wanted a man as much as she wanted him.

“Stay still,” he commanded, voice still calm, but with a thread of seriousness woven into it. “I don’t want you wiggling out of the scarves, Lila.”

He walked over to her left and sat on the bed. He tucked her left hand between his thighs. Her forearm rubbed up against his extremely impressive erection, but it wasn’t until he thumbed over her mouth that she realized what he’d done. He smiled at her at the exact moment she understood that she was completely at his mercy. She licked his thumb, but he pulled away to toy with her nipples. When he leaned down and sucked on one, Lila cried out, sparks flickering through her body. It was like he’d run a live wire from her breast to her clit. She moaned, pulling on her bonds. She couldn’t move at all. He tormented her for a while, but just when she thought she’d climax without him ever touching her pussy, he stopped.

“What are you doing to me?” she managed to say, panting hard. She wished she could run her hands through his hair.

“I’m teaching you how to let go,” he murmured into her skin.

When he suddenly stood up, she moaned a protest. When he walked over to the door and shrugged on his coat, she frowned. Her clit was throbbing, she couldn’t move, and he was leaving? “Theodore?”

She watched him walk out, body poised on the edge of desire.