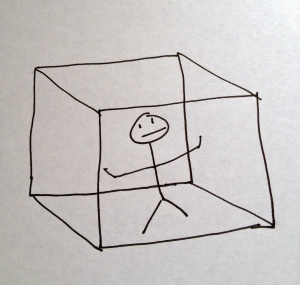 The other day I read an article that talked about the pressure men in our society have to conform to an ideal of masculinity. (fyi, I’m American, so: western culture.) The author of the article claimed that girls don’t have any trouble being tomboys but guys have a great deal of trouble expressing anything that doesn’t conform properly to the masculine norm. Did I ever mention the GRIEF I got when I was a teenager for having short hair, wearing a baseball cap, and riding my bicycle as often as I possibly could? No? Well, now I have. Who says girls don’t suffer from pressure to conform to femininity? They do. So does everyone else.

Even so, the idea that we are finally able to talk about people and their obsessive attention to whether or not the dude in the cubicle next door is guy enough for them is a relief (substitute ‘garage next door’ or the ‘line opposite yours’ or whatever job you prefer for ‘cubicle’). As a writer of romance novels, I’m intimately familiar with the idea of what’s hot and what’s not when it comes to men and honestly? The possibilities are ENDLESS.

Different people like different things. I have a girlfriend who adores long hair on a guy. I know another one who could care less what a dude looks like as long as he has a brain. Scientists turn her on. I have another friend who doesn’t like men who wear makeup. Another who does. The one thing my friends all have in common, however, is a severe hesitation and deep fear of telling other people what really rocks their world. Why? Because none of them like men who fit into society’s view of what a true man is/does/looks like.

I don’t know why it continues to surprise me, considering that the human race has been knocking boots for, well, how long has the human race been a species? Yeah, that long. At any rate, what makes a dude masculine isn’t his hair length or what he likes to read or how fit his body is. It’s all of those things combined. And none of them.

Years ago I read a book by Jo Beverley. The hero wore heels. And powder. He was also ruthless, intelligent, and remarkably powerful. From that moment on I began questioning everything I’d thought about what it means to be masculine. As a writer I need to know what makes men tick (or any character, man/woman/child). I need to know what makes most of my readers tick. I also need to somehow preserve my sense of voice and write what I find interesting, amusing, and erotic. To do that, sometimes I stretch the boundaries of what my readers probably feel is comfortable. My job is to make those stretched boundaries believable. Some of my men have long hair and some have none. Some are white, some are not. Some of them are young. Some are heading for the wrong side of 40. It works because my headspace is delightfully flexible when it comes to attractiveness.

The tragedy comes in when we put our books down and surface back into real life. My husband likes to dance. He also likes to work on old cars. These two things are so completely opposite of what society says a guy should be that it amuses me to tell uptight people about his hobbies and watch them try to reconcile what they believe is right with what actually is (Don’t worry, I’m not an asshole. I only torment people who deserve it). He also has long hair. He’s not white. He’s crazy smart. All of these things sound like a recipe for a failed marriage, right? Uh-huh NOT.

The thing is, if you unpack almost any man or woman, you’ll soon realize that they’re not conformists either. People like and are many different things but what they’re willing to show you is only a very small part that generally matches what society says they’re supposed to be. The people I’ve met who suppress their deepest sense of self are usually miserable and tend to crack open violently at some point in their lifetime. The people who let it all out are happy, but often ostracized. The pressure to be and act a certain way is incredible, and not just for men.

So where do we get these ideas about what makes a man masculine? From each other. From what our parents say. From our peers. It’s a self-sustaining methane gas factory. If I wasn’t a writer I’d probably find this cycle of oppression/repression indescribably depressing. Luckily, I have the best platform in existence from which to seed change: fiction. Instead of writing reality, I can write what I wish was reality. I can make all my characters’ dreams come true. And if my hero has long hair and likes to wear eyeliner, I’m subtly encouraging every reader who falls in love with that particular fictional character that it’s okay to be who you are and like who you want.

If you can’t safely tell anyone who you are for real, that’s okay. If you can, that’s okay too. The most important thing is to stop drawing boxes around yourself. Free your mind. If you do that, all the boxes we’ve placed around other people will eventually disappear, too.

2 thoughts on “Dear Dude: here is your box. Conform.”